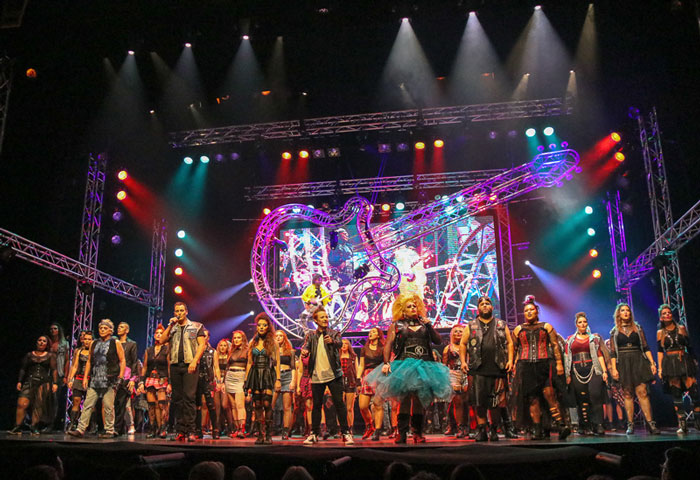 It’s people like Trevor Patient from Platinum Entertainment WA Pty Ltdthat Design Quintessence loves dealing with. When he came to us with an idea to build a giant guitar for the WA licensed staging of the Ben Elton and Queen musical about one of the biggest bands of all time, We Will Rock You, we were chomping at the bit.

“We love designing creative elements to be made from truss and we love working with creative people who come up with the ideas to do so – step up Trevor Patient,” Ian Wood said, clearly inspired by Trevor’s concept.

The brief was for a giant guitar that mimicked the shape of Brian May’s guitar and Design Quintessence was able to get pretty close using a combination of custom and standard F34 Global Truss components. Whilst trying to emulate as much detail as possible, at 8m long and over 3m high, the truss guitar became focus point for the very impressive local production of We Will Rock You. Trevor was happy with the way it turned out, “It’s nice to be able to come up with an idea and take it to a company like Design Quintessence who can just turn that idea into reality without any fuss.”

The WA Pro-Am production has been a resounding success, with tours planned throughout the state. Ben Elton was present at the gala opening night on 23 March and must have been impressed with what he witnessed.

Congratulations to all those involved in what is a fantastic production.